I just returned from my latest Puppets Without Borders expedition which took me to Cambodia; what a trip!

Having been selected as one of the Cambodia Creative Four, I spent a month volunteering with Let Us Create, an NGO that serves more than 100 kids, providing education, nutrition, and artistic experiences. They provide a safe and nurturing environment where kids can just be kids.

The Khmer Rouge's reign of terror in the 1970's took a serious toll on Cambodia's culture; 90% of the country's artists were executed, and those who survived were left understandably fearful of practicing their craft. Decades later, Cambodia is still struggling to rebuild the culture that was lost; Let Us Create works with artists like me to help inspire the younger generations with various art forms.

In late November I landed in the capital, Phnom Penh, and within a few hours had tracked down my people... The shadow puppeteers of Sovannah Phum Art Association. I attended an amazing performance of shadow puppetry, dance and music, then came back the next day and took a workshop in making the traditional leather puppets; you can read all about that on the Small Pond Arts blog. It was important for me to get some exposure to traditional Cambodian shadow puppetry before teaching the art form to kids at LUC.

A few days later I was on my way to Sihanoukville, on the south coast. The first week at LUC was orientation. One day I was whisked off down bumpy back roads on the back of a motorbike. My two guides - the other on his own motorbike - are social workers, and they took me to visit a number of the families of the kids I'd be working with. The families live in extreme poverty; meeting these parents face to face was vital in helping me understand their children. That week I also started working the lunch service, doling out rice and soup, and helping with the clean-up. All in all, a humbling beginning.
By the second week I was ready to launch into some workshops. The LUC centre is divided into three age groups: nursery, junior and high school. The little nursery kids were massively adorable, and my sessions with them included playing with hand puppets, drawing shapes, colouring paper dolls and singing.

I spent the most time with the junior group. They were a huge ball of energy and jumped into any activity I presented them with. We did lots of sewing, including hand puppets, sock puppets and felt pins. We did paper cutting, artist trading cards and drawing comics.

Lastly, I worked on creating a shadow puppetry performance with the group of 30 + high school students. 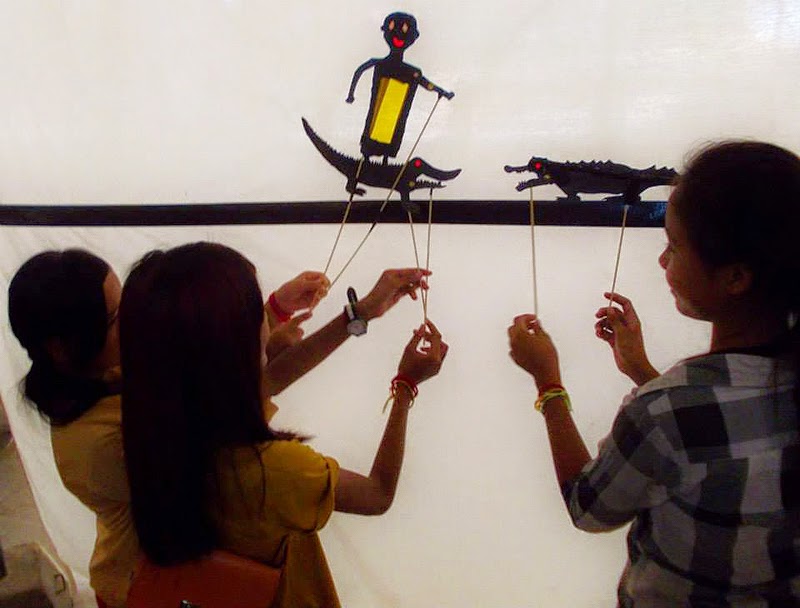 The story I selected for our play was Crocodile Nen Thon, which I found in Khmer Legends by Demaz Tep Baker. It's the story of a young monk and his extremely loyal pet crocodile. LUC's director, Sopheap Kong, translated the story into Khmer, and the story was read in both languages to the students. I started working with the youth building their puppets. Despite our very limited time together and a bit of a language barrier, they made some really great puppets. We had two rehearsals, and then it was showtime!

The shadow play would be part of the first ever performing arts show at LUC. I worked with one of the other Creative Four, João Telmo from Portugal, to program the rest of the show that would include all the 100+ kids from the centre. Although I thought this was all a pretty big deal, I wasn't sure what to expect. Would the kids show up? Would their families?

The day of the performance arrived, and the kids not only showed up, but they were dressed in their best clothes and bouncing off the walls with excitement! I'd made all of the junior students colourful wristbands from scraps I picked up at the local tailor, and the kids went crazy for them. The energy before the show was electric - everyone was so excited! 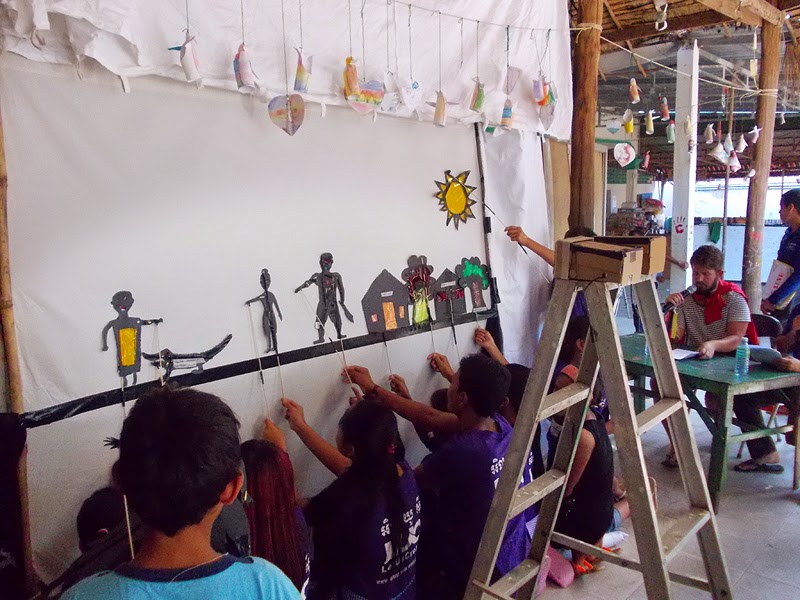 The performance started with the shadow play, which went off without a hitch. I was so proud. Next up, the nursery kids sang two songs while waving around the puppets I'd made for them. The huge group of juniors ran out in their colourful arm bands, doing a choreography João had taught them, followed by a song. Last up on the program, the high school students performed a powerful spoken word piece. That was supposed to be the end of the show, but then something really incredible happened.

The biggest success of the day was something we had nothing to do with. A group of 5 high school boys stepped on stage, and performed a choreographed dance that they'd self-organized and rehearsed... And they were fantastic! Now this may not seem that special, but in a culture that is somewhat out of touch with performing arts, this was huge, as it came from the kids themselves. 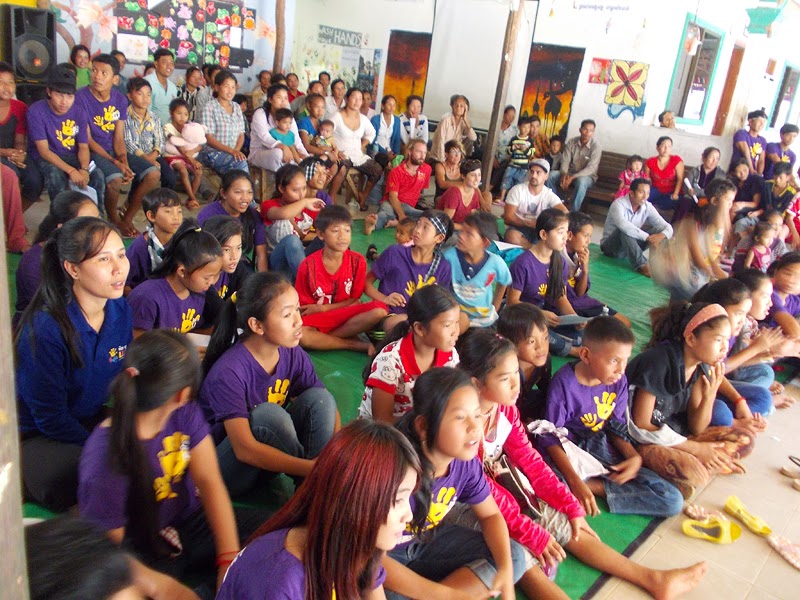 Following the performances, the place erupted into a huge dance party. Staff and kids of all ages danced with abandon - there was so much pride and joy that day at Let Us Create, I think it is a day we'll all remember for years to come.

The show was a pretty tough act to follow, but I had two more days of workshops before wrapping up my stay at LUC. We did some more sewing, and the juniors got a chance to try making shadow puppets, too. 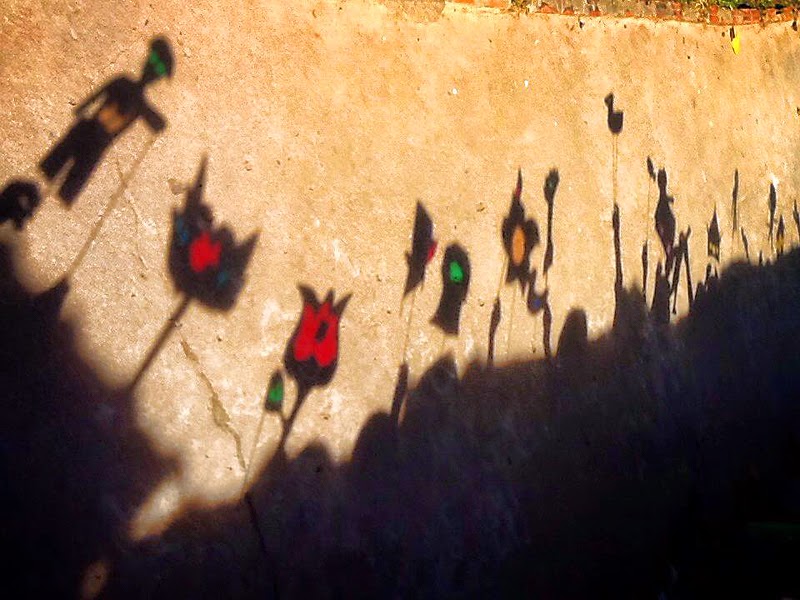 I left Sihanoukville on Christmas Eve to meet my husband Milé in Phnom Penh, and we spent the next two weeks touring around Cambodia. During this time we attended a number of performing arts events, including another show at Sovannah Phum, music and dance at Cambodian Living Arts in both Phnom Penh and Siem Reap, and a circus show at Phare Ponleu Selpak in Battambang. Each performance was so unique and performed with both gusto and grace. There is a tremendous amount of energy coursing through Cambodia's younger generation, and the enthusiastic audiences proved there is an appetite for the arts.

If you'd like to help Cambodian kids discover the arts in a safe and nurturing environment, you can support Let Us Create by making a donation via their website.

A huge thanks to my friends and family for your support - this trip would not have been possible without your donations, and so the success of this project belongs to you, too. And of course, thanks to the volunteers and staff at LUC for your friendship and assistance.
Posted by Krista Dalby at 10:19 AM 1 comment: